I promised you a separate blog because I went somewhere new. It was to visit big sister Steph and brother-in-law James up in Nottingham. Not only had I not been to Nottingham before, it was my first visit to their new home which they’ve only been in a few months.

I felt at home quite quickly because they had pets which were my size, so it wasn’t just the big humans in the house.

On Saturday, we wandered into Beeston and went for tapas at a place called the Frustrated Chef, and very nice it was too. Whilst we were perusing the menu, I had a nice leaning post in the form of Karen’s glasses. Its good that I’ve got that as I’m still a bit wobbly since my tail became frail.

The girls had a few dishes between them and I think this was my favourite because it was so well presented. 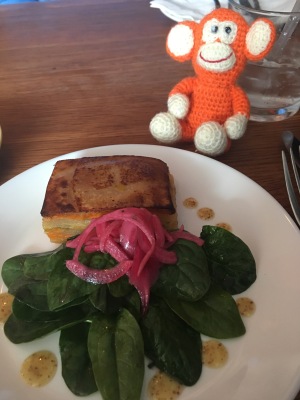 After lunch we sat chatting although I did get scared for a brief moment as all I saw was hair, but it was all good, just Steph coming to say hello with a great big smile. 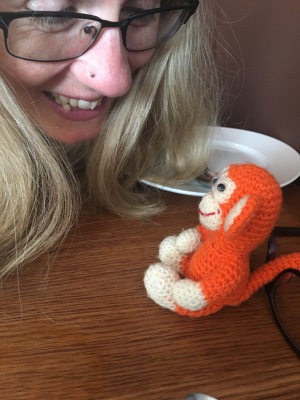 I got a bit bored after that as all they were doing were talking, so I had a bit of an explore and found a tree to climb.

We then went to another local shop and Karen nearly exploded with joy as she found an orange pipe cleaner to reinforce my tail with.

After the walk home, that really was enough for the day, so I had a rest on the armchair in the conservatory. I may have even rested my eyes for a short while.

Sunday was a relaxed affair which started with a very delicious brunch. Even my napkin coordinated with me and I had my very own seat. 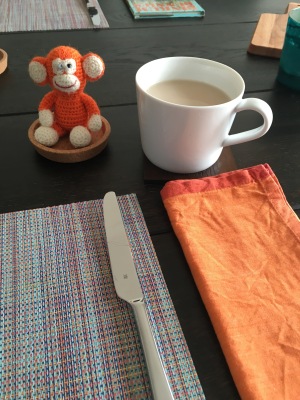 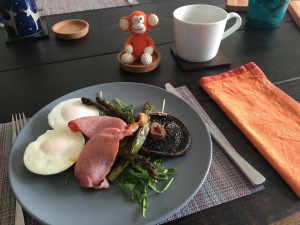 Things got a bit silly after that and I started to explore the house a bit more, playing as I went along. As my tail is all strengthened now, I had a little swing from the light before I had a ride on the elephant.

The reason I needed the elephant was so that I could have an explore round the garden. Best of all I found a swing, so more swinging around for me before I took a few deep breaths and smelt the roses.

Thankfully I got a lift back with James and I think I blended in rather well, don’t you? 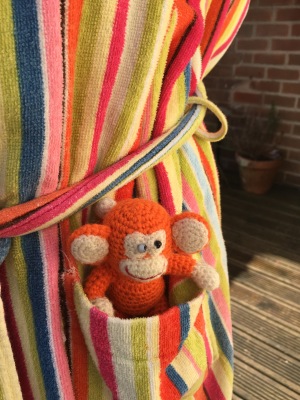 Now you’d think that was enough excitement for the day but, no, there was more. As I’d explored the back garden, I really had to take a look at the front garden, especially as we were passing through on our way out. And, of course, Karen made me sit in the purple flowers.

We went to Lakeside Arts Centre although no pictures of the art as we weren’t allowed to take any but it was an excellent exhibition, all about colour. I was allowed out afterwards when we had a cup of tea in the cafe. I even got to sit near the window so that I could see the fountain.

James kept himself amused by waving to the people on the passing trams but my arms were too short to join in.

After that, we had a wander around the lake. As well as seeing some local wildlife, flora and fauna, there were also some people using the orange boats. 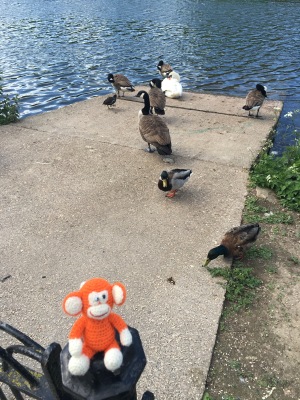 As we turned the corner, we saw a grand view of Nottingham University which looked rather impressive.

And so that was the day over and we all headed wearily home to have a rest. This time I managed to bag a seat on the sofa which was handy as it meant I could do some reading (or did I rest my eyes again?).