I thought I’d treat you to some of the things I got up to this weekend, especially as the weather was (mainly) quite nice. It was more like an August bank holiday than the May bank holiday.

Before the weekend, though, I was lucky enough to go out twice in the week for dinner with friends. On Tuesday, we headed to Bothy in West India Quay and had a bite to eat washed down with a bit of summer rose.

We decided to change venue and walked across the bridge. There were some swans swimming in the water, including a signet who was still quite fluffy. As we were quite close to the water, I had to stay safely in Karen’s bag to make sure I didn’t fall in, especially after that wine. 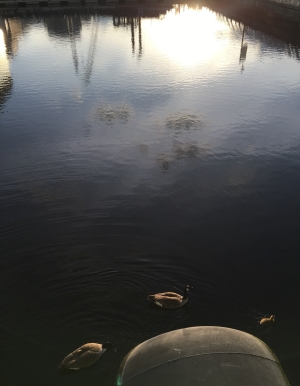 Over the bridge we had another drink and Julie was helping me decide which cocktail to have. After all, someone had to keep her company, it would have been rude not to.

Julie was telling Karen all about a pop up art event which sounds quite interesting. We’re going to have to see how the weather holds as its outside but could be fun.

On Thursday we went to Plateau for dinner with Maria and I had a very special spring cocktail. I got to keep the flower but probably more because it wasn’t edible than because Karen didn’t want it. 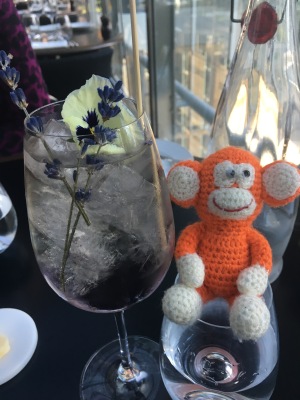 The pudding was really tasty and light, as well as being particularly pretty (even if the chocolate disc was as big as my head).

Friday was fabulous when we got off the train. Not only could we hear the music for free at Dreamland, but had a walk on the beach on the way home. It was just perfect as the sun was setting and the tide was out so the sand was easy to walk on and ideal for my little legs. 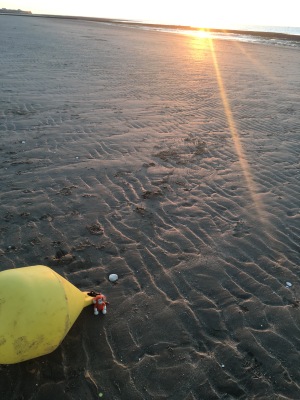 Saturday was a nice relaxing day and moving a few bits around at home, as well as some flower arranging. Honestly, there’s no end of them, its almost as if I live with a girl. At least there was an orange one for me to blend in with. 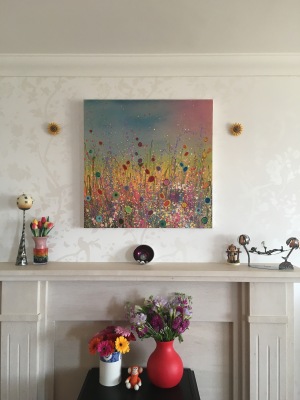 Sunday was walk day and we went all the way from Margate to West Bay. You can see me getting further and further away and, at one point, there was nothing but sea to see.

Monday was another glorious start so we had breakfast at the Bus Cafe and very nice it was too. We even saw the coastguard helicopter land and I had a good view from my shell shelf.

We then had a late lunch in Westgate and a very nice fish finger sandwich although no pictures of that. I think Karen thought I needed a rest after all that walking.

Talking of pictures, we haven’t had a picture of the week for a while. Karen took some nice sunset and sunrise pictures (of course) but I wondered which one you preferred?

Now that the bank holiday weekend is over, that means its only 4 days to go and then I’m on holiday for a whole week (yippee).