Sorry its been a while since I’ve updated you. I didn’t have many photos before but now I have loads, so hope this isn’t too long for you. The reason for the title is I need to tell you about before I went away on holiday to Cornwall, during my holiday and afterwards when I got back home.

It was going to be a tale of two halves (don’t worry, my tail isn’t in two halves!) but it extended into another weekend so I had to rename it.

Before I went away, I had a bit of an orange themed weekend. It started with me finding some orange flowers near home and then Karen having an orange drink. 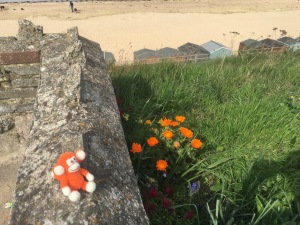 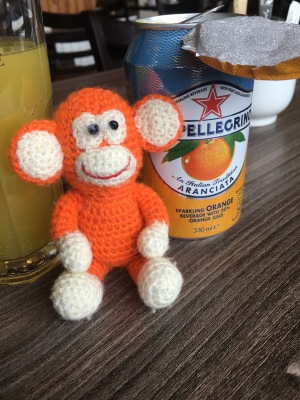 After all that excitement, it was only right that there was some more so decided to have some tea and cake with a bit of cheeky ice-cream. 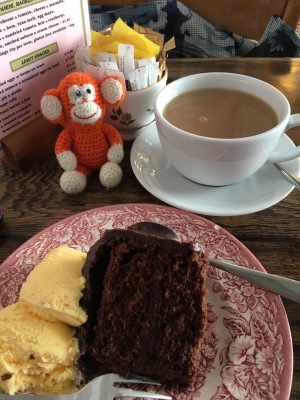 The weekend bought some lovely sunshine so I just had to get out onto the beach. 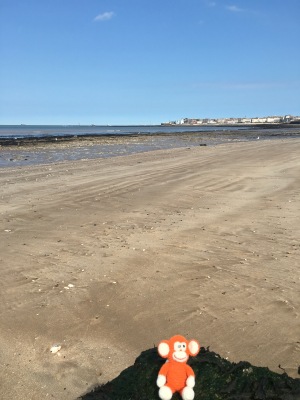 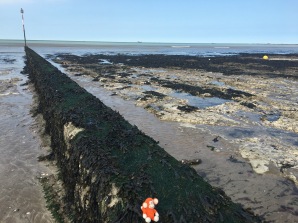 When I got home Karen had made me a cup of tea and surprised me with a cupcake, all because it’s my second blog birthday. Yes, it’s been two years that I’ve been amusing you with my tales. The other reason for the cupcake (as if we needed another) was that we were finally on holiday. The first one since November so very much needed. 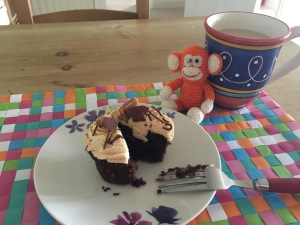 On the Monday we took a trip on two trains. As we had to go through Paddington station to get the second train, we just had to visit the namesake himself. I had to be on my best behaviour though as otherwise there’d be no marmalade sandwich for me, emergency or otherwise. 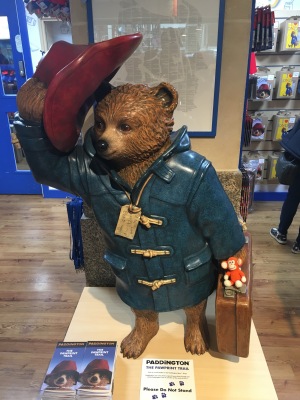 The second train was quite different from the Margate to London train. Look at all this space I had on the holiday express. 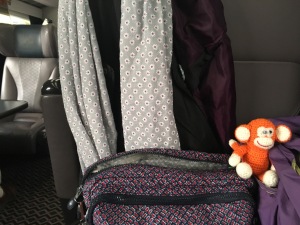 Finally we got to our destination – the Scarlet Hotel in Mawgan Porth, Cornwall. It was amazing having a cup of tea whilst basking in the sunshine and looking at the view. 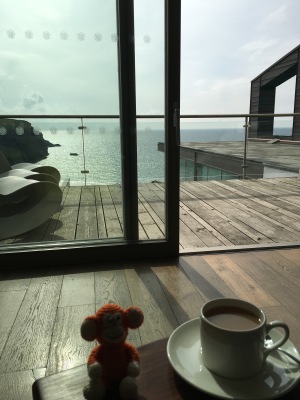 Before going to the room, I had a little explore and the hotel had won these awards which were art pieces in themselves. Not only that but they had orange flowers too which I’m sure they got especially for me. 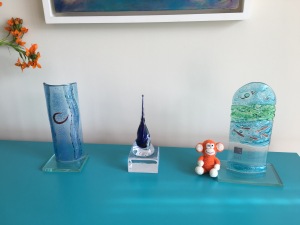 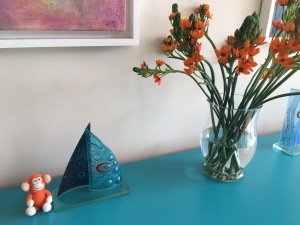 If you think I had lots of space on the train, you should see my room. 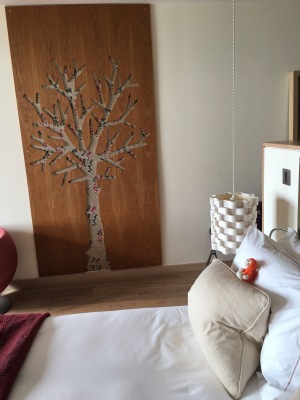 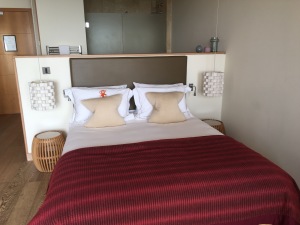 And the view from the bedroom patio was quite something too. 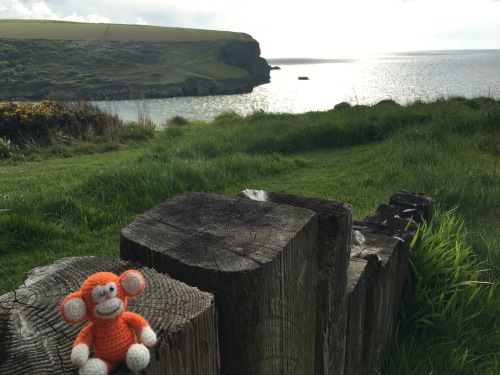 I had another chance to explore after breakfast on the Tuesday and found this chess board which was beautifully crafted from wood. I then found a perfect Malcolm sized boat although seemed to be missing some water. 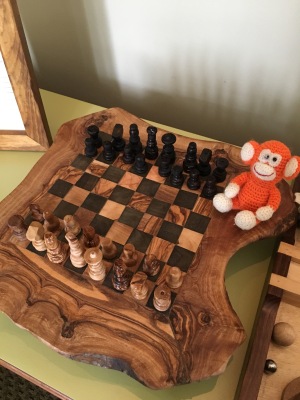 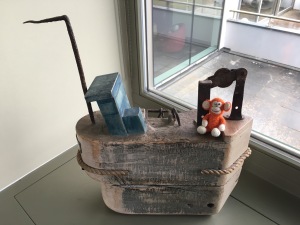 After all that exploring I had to have a sit down so went to Karen’s reading spot which, for some reason, I didn’t keep for long. 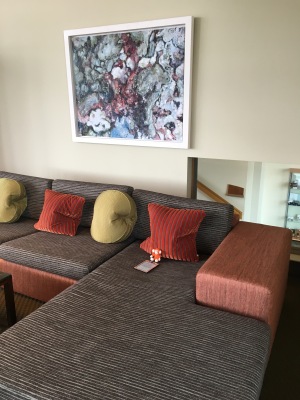 As the Scarlet is an adult only hotel, I had to be careful how often I explored, especially as I didn’t want to ruin the peace and quiet with my excitement. I was allowed to monkey around in the room though and found this great spot where I could hang around and look at the view. 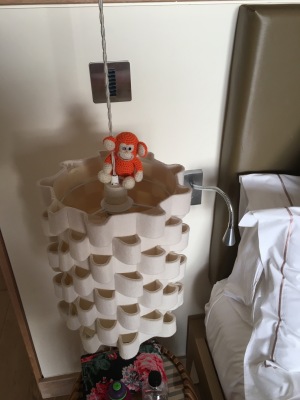 By Wednesday, Karen thought I ought to get some fresh air and exercise so took me down to the local beach. I think the exercise was getting down to the beach as it was quite a high clifftop. When we got onto the beach I was glad to see that it was sandy, just like home, and also had rocks that I could climb on. 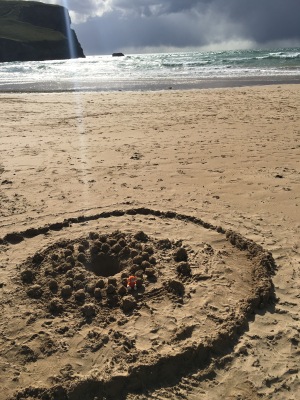 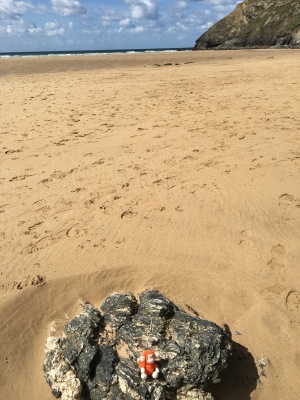 Best of all, someone had an orange kite and was flying it just in the right spot so I could get the hotel in the background. 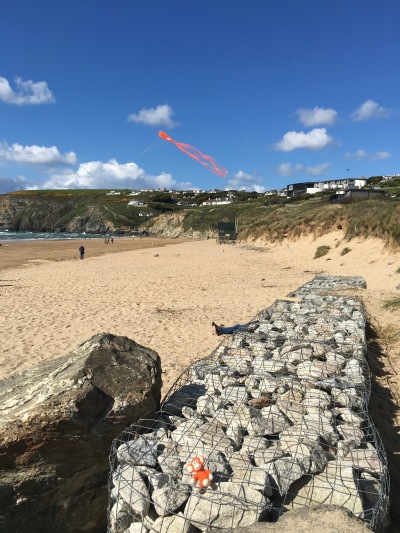 Before too long, it was time for us to head back up the cliff to the hotel, especially as the tide was coming in. 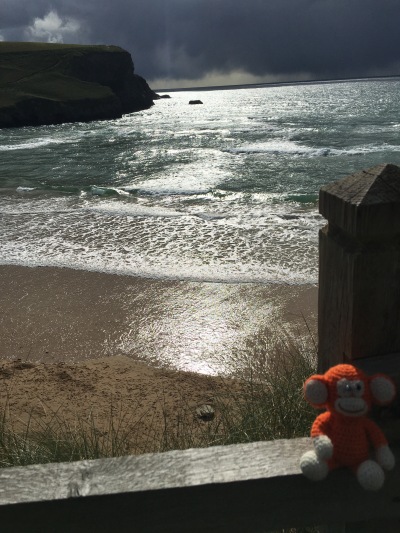 Thursday bought a trip into Padstow and, whilst Karen was doing far too much shopping, I sat and looked at the boats. 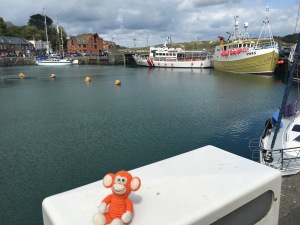 That was the holiday over with as travelled back home on the Friday but was lucky enough to have visitors at the weekend so it still felt like a holiday.

Saturday was a lovely sunny day and quite warm when out of the wind, although the Main Sands wasn’t as busy as I thought it would be. 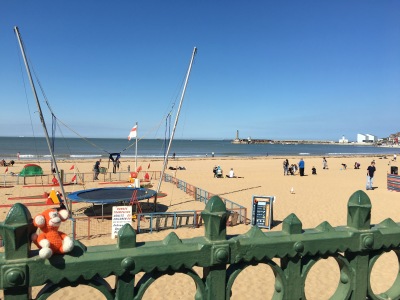 The other reason that the weekend still felt like holiday was that we had a treat of afternoon tea at the Sands Hotel. They even had carrot cake just for me so I was kind and let Karen have the chocolate cake. 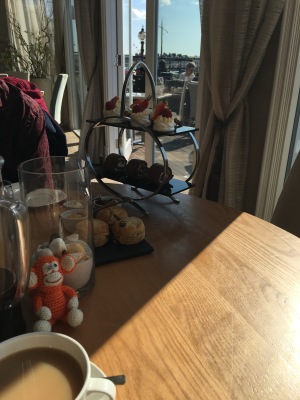 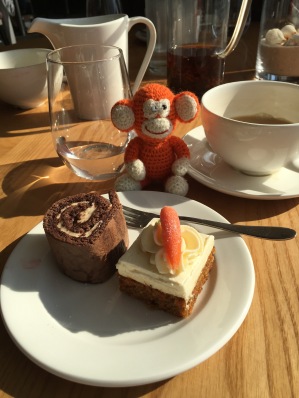 Sunday we headed to the Cliftonville Farmers Market but it was a bit windy for me to come out. Fortunately we weren’t out for too long as headed to the Turner Contemporary for some culture so I even joined in and did a bit of artwork myself. 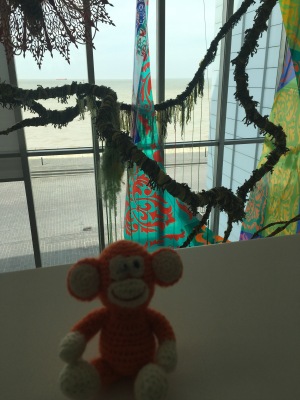 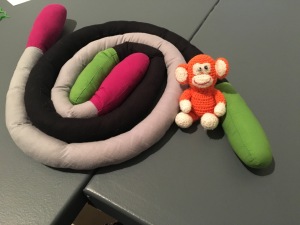 As it was Sunday there was only one other thing we could do – have Sunday lunch which we went to Olby’s for and it was scrumptious. 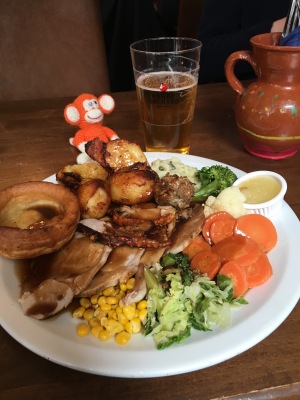 That’s it for now although already counting down to the next holiday in June but, don’t worry, there’ll be a blog before that.