April has been a pretty good month so far weather wise. One day when I was working from home, I went out for a walk at lunchtime and I wanted a paddle but Karen wouldn’t let me as we didn’t have time. It was rather mean of her, even the seagulls thought so.

And I was so close to the water too!

Friday last week bought some frivolity as we met Sam for a drink but even before that I started misbehaving and playing in the flowerbeds. Its only because the flowers were so colourful, just like me.

As it was Sam’s birthday soon, we decided to have some bubbles. I then moved onto something stronger but only because the gin infusion was my namesake. Not sure I’m quite 47 yet although (shhh, don’t tell anyone) I know someone who will be in a few months.

We went to the Tea Merchant but I have to admit that I didn’t see much tea being consumed.

The weekend was really lovely and relaxing, with lots of sunshine on Sunday.  I even had the patio doors open when I got home although not for that long as it wasn’t that hot. It was nice to have a hint of how its going to be when its properly summer.

So nice to be sitting and relaxing with a cup of tea.

Unfortunately another work week beckoned but it wasn’t too long until the next weekend and we were spoilt again and on both days.

Saturday I had a wander into town and saw some boats on the way near the harbour arm. I didn’t think you’d be able to see them with me in the picture too, so got Karen to take a close up for you. 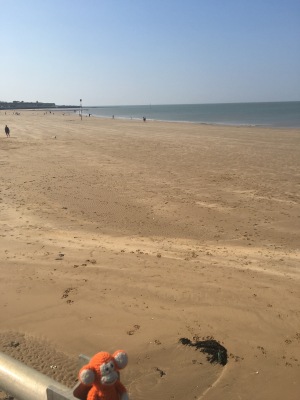 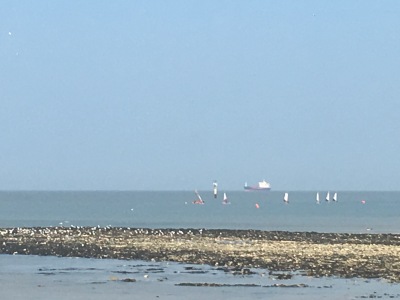 They were even there when we stopped at the Bus Cafe for a cup of tea, although behind us so slightly hard to see, but I could still see the sea!

The other excitement on Saturday was that I was given one of the new pound coins. I’ll try not to spend it all at once and I’m certainly not giving it to Karen as she won £5 on the lottery.

I did go for a walk and then Karen got wet when she went for her first barefoot paddle of the year. Fortunately she dried off quite quickly as sat on the sea wall for a bit in the sunshine and people watching. 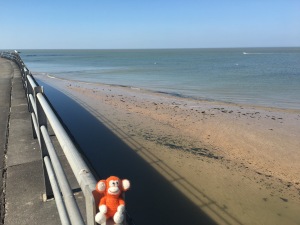 Let’s hope next weekend is just as nice when its Easter (keep everything crossed).