I bet you weren’t expecting this as my next blog post, were you? Don’t worry, the Isle of Man one is on the way but there’s a whole week to tell you about first which turned into some pre holiday treats.

On the Wednesday, I was treated to afternoon tea at the Hilton South Quay. They’d kindly reserved a table for us which was good planning (and you know Karen likes a plan).

Surprisingly, we were in the executive suites at the top of the building so it had a rather impressive view. 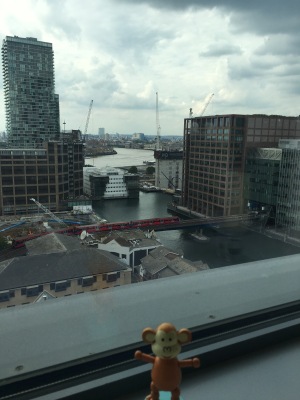 Talking of impressive, the cake stand was pretty huge. Not sure you can even spot me?

Don’t worry, they weren’t all ours, in fact we didn’t get any of them but we did get a rather nice selection delivered to our table. I wasn’t sure which cake to have first though. 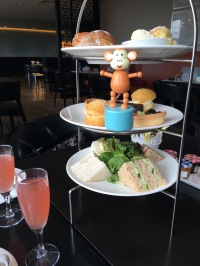 After all that yummy food, Karen thought it sensible I have some fruit or something savoury so I didn’t get a sugar high. There was plenty of choice of those too. 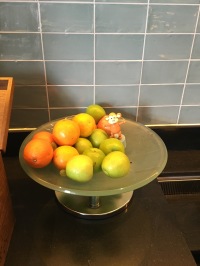 I wasn’t able to manage anything else until the next day and even then I only had a banana and some water. Think I need a refill on the water, its looking a bit low.

The weekend eventually arrived and it felt a bit like summer still as the sun was out. I had a bit of a pool weekend with a rock pool, my own personal swimming pool and the tidal pool. Just a shame I’m not good with water!

When I was walking along the beach, I noticed this big dome and thought an alien had landed, but it was a pop up theatre.

I then went to the absolutely brilliant exhibit at the Pie Factory by Ross Andrews and Darren Lewis called Sand, Sea and Light. Two different mediums, one photography and one paintings, showing different aspects of the seaside. They were stunning and Karen was very tempted to buy more than one thing.

I then had a rather nice walk home along the promenade which rounded the weekend off nicely. 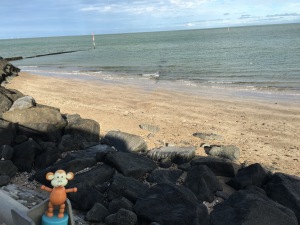