It was Karen’s last week with her current team and, despite having had many different role titles, she has worked with some of them for nearly 7 years.

There was a surprise when she arrived at work on Friday as the desk had been decorated. The surprise wasn’t that the desk was decorated but that it had been done in a tidy and straight way (without any sprinkles). I also got a boa so that I could disco the night away. 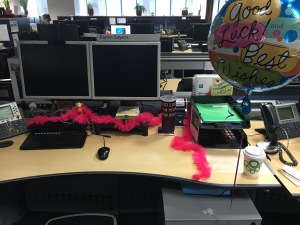 Most of the team went out for lunch and I managed to sneak a crafty chip whilst they weren’t looking.

In the afternoon, Karen cleared her desk and adhered to the clear desk policy (unlike some) but, even for her, it was rather bare.

Then it was party time and off they went to the pub but I was allowed to go too, so made the most of it by having wine and a cocktail (by the way, that was a non alcoholic cocktail because I’m only young). 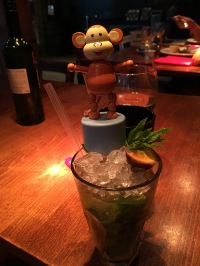 Despite having been out to lunch, we thought some more snacks were in order and one of them even came with an orange sauce. 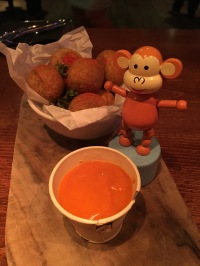 The highlight of the day was the lovely and thoughtful gifts that the team bought Karen, especially the words in the card. I particularly liked the flowers as they had orange wrapping. And, at long last, Adam confirmed that Karen was allowed to keep me which made us both happy and means the blog can carry on. He obviously couldn’t be in non-compliance with the Monkey Wellbeing Legislation of 1972 (thanks Paula!) otherwise we’d have had to escalate to RCOP.

Saturday was a bit of a write off but I made up for it on Sunday and went out for a walk to get some brunch. On the way, I came across a nice private pool and was going to go for a swim but Karen thought it was a bit deep (and wet) for me. 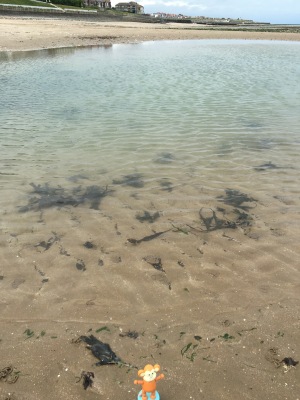 As we walked past the square, there were a lot of flags up and I think they were getting ready to do something for the Queen’s 90th birthday, although it hadn’t been terribly well publicised. 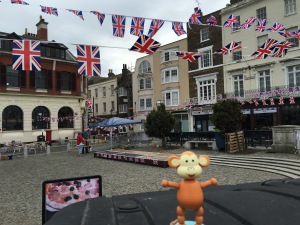 Brunch was at our favourite place, the Cupcake Cafe, but we tried something different this time around which was almost as yummy. No cake though as it was still morning. 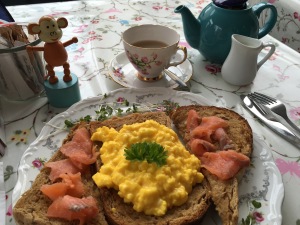 By the afternoon the sun had come out and Karen was going to wash her windows so that I could see out of them but then decided another walk on the beach would be more enjoyable. I rather liked sitting in the sun, warming myself and feeling the fresh air. It was quieter on the beach today and I think the clouds put the people off from visiting apart from the determined few.

When we got home, Karen did manage to have time to do the windows and they are pretty clean now. Not sure it will last living by the sea.

So that is my moving on story, although not quite sure if I will move on this week as there’s been a delay with the desk move. I also need to make sure the new team are up to the job of looking after me. They do have quite high standards to live up to.

To end on a high note, Karen asked me to share her favourite photo of the week and it was sunrise on the way to work on Friday. I didn’t see it personally as I was already at the office, but apparently it was really warm and the waves were just gently lapping onto the sea wall. 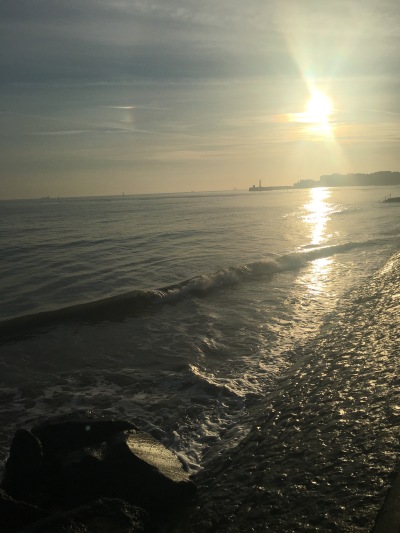