No, don’t worry, I haven’t launched off into the sea or space. It was an exciting weekend for Karen with two different launches, although not so exciting for me as I wasn’t allowed out as much as usual. Not sure why though …

Most of the launch excitement happened on Saturday. Not only were there two launch parties but Julie came to visit for the day.

First of all we had the book signing of Peshwari Nans by Stephen Haughan, where I also met Vivien.

After that, the girls did some wandering around the old town before heading for BeBeached on the Harbour Arm for a rest and refreshment. Fortunately, by then, the sun had decided to come out so we were able to relax and watch the world go by whilst reading the Margate Mercury. 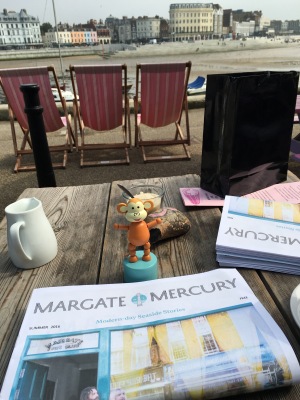 Karen had been part of the crowd funding for the first issue of the Margate Mercury and had been invited to a private party at Margate Arts Club on Saturday night, which was the second launch this weekend. Apparently she had a nice evening and met some lovely people, although I wouldn’t know as I was left in her handbag. There was also a gift of a rather nicely decorated bag.

Sunday was much quieter and a restful day, much of which was spent reading and snoozing, but we did go out in the afternoon to the beach as the sun was out, although it was a little breezy, enough for the kite surfers to be out.

Karen decided it was nice enough to go for a paddle and she tried to get me to join in but, as we know, water doesn’t really agree with me and I’m a bit little to be paddling. She even suggested a bubble bath but that turned out to be unrealistic as there weren’t quite enough bubbles, even though the few that there were, were pretty glinting in the sunshine.

I told Karen that I preferred seaweed and there certainly wasn’t a lack of that on the beach.

I hope being left behind or in Karen’s handbag is a sign of things to come when Karen moves to her new role. There does seem to be a bit of uncertainty about what’s going to happen to me because Adam hasn’t confirmed I can go with Karen which, of course, is because I’m so useful and productive. I think Adam needs persuading that joint custody may not work as it would hinder my blogging – can you help me with that please? Karen promises I can go out and play more if I am released.