Guess what – it was my Monkey blog birthday on Thursday which was rather exciting. Its been a year already and what a fun year it has been. Adam asked me what my top post was and I had to think quite hard about that as I’ve done so many wonderful things. I hope you’ve enjoyed reading them as much as I’ve enjoyed writing them.

I thought that the occasion should be marked with cake so I persuaded Karen to buy me a banoffee cup cake which I dove right into. Quite surprised there was no candle though, so I hope she does better next year. I might be big enough to blow it out by then.

The Queen happened to turn 90 on the same day and I hope she feels suitably honoured at sharing such a special birthday.

The other person with a birthday this week was Adam and he turned 40. It was only fitting to give him some presents and I also sang happy birthday to him from my podium next to his balloon.

The weekend wasn’t quite as exciting and the weather seemed to have gone backwards. It was rather chilly and I nearly put my jumper back on. When its windy like that, it does make the waves rather big. 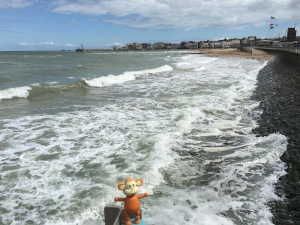 As Karen didn’t want me being out too near to the sea, she did let me have some fun on a ride with my monkey cousin. We had to keep the L plates on though as we’re still learning to drive.

On the way home, Karen picked up some rather pretty flowers from the Old Kent Market, although she couldn’t explain why there weren’t any orange ones.

On Sunday, the wind was even stronger and I wasn’t even allowed out of Karen’s bag. She did take lots of photos for me though and here’s one showing how stormy it is. What a difference from last weekend.

Apparently, the clouds didn’t protect us from the aliens who decided to land on the beach. Glad I wasn’t allowed out as I think that would have been scary. 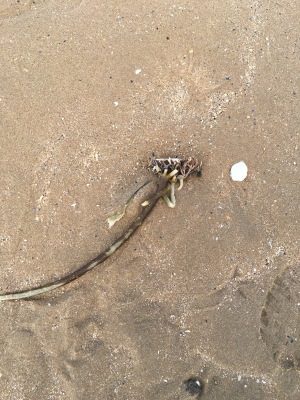 Or is Karen just pulling my leg and teasing me, when its actually a sea plant?