Hello folks, we have a longer blog this time around because I’ve been up to so much exciting stuff.

I started off with doing some test boating – yes, you did read that right, test boating. What may that be? I hear you cry. Well, now that I live at the seaside, I’d really like to get into some watersports and make the most of being in Margate. As Karen wanted me to be safe, we started in the kitchen sink but just as well we did as I did sink on the first attempt! 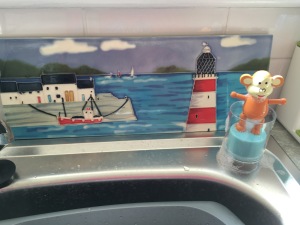 The second attempt was much more successful, providing I didn’t move too much. Not sure what Karen was thinking of with the bubbles because I really don’t think that replicates the swell of the sea.

On the first Sunday in April, never mind springing, but summer had arrived. It was absolutely glorious in Margate. 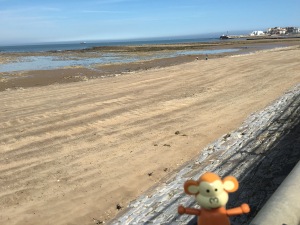 I had loads of fun frolicking on the beach and played with both seagulls (while having a seaweed bath) and a rook. The rook was a little too large for my liking, even at a distance. 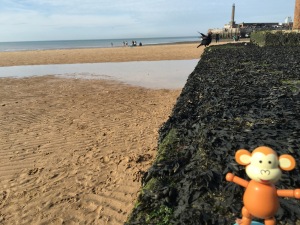 Even on the way home, I got to play on a buoy and in a cement cave. 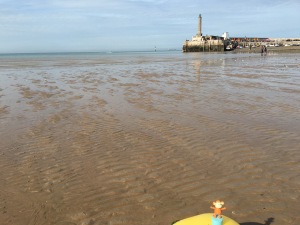 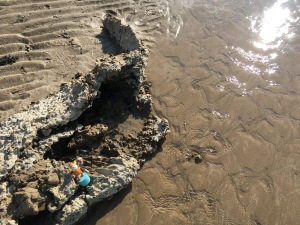 After all that excitement, I rather wanted a swim and the pool did look rather tempting but, as you may recall, I’m not actually allowed in water.

So that was a lovely end to a Sunday and, after a hard week at work, then came Friday and the holiday began. I couldn’t wait until we got home and stripped off my work clothes while still at Stratford (how rude). Just as well I didn’t wait as it was a rather long time (90 minutes) before we could get a train due to a station evacuation. 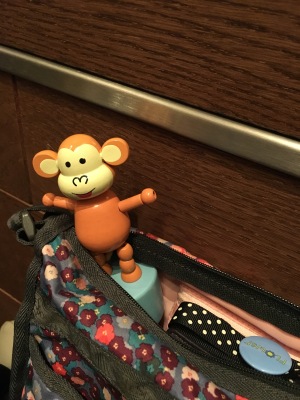 The other reason for trying to get home on time was that we had visitors this weekend – Karen’s big sister Steph and her husband James came to visit. For obvious reasons, we didn’t do anything on the Friday night but started Saturday with a rather nice brunch. 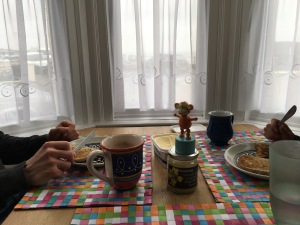 No pictures of the cooked food, though, just toast and me helping James with the honey.

After that, we headed to the Turner Contemporary and had a wander around there. I saw a rather interesting see saw and I particularly liked it as one of the people had orange trousers. The actual reason was far more meaningful than that. I wasn’t allowed on the see saw though in case I fell off, but I was allowed on the balcony so that I could look out of the window. 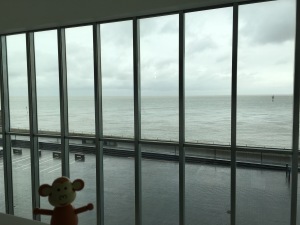 After a good look round a sit down was in order, so Karen and Steph did a bit of drawing in the workshop. One of them drew me on a boat which I was rather chuffed about and the other used a lovely mixture of colours for the sky and sea.

So, by then, it was mid afternoon and there was only one thing to do – have tea and cake. We went to the Seaside Parlour and I had to help Karen with her piece of cake. 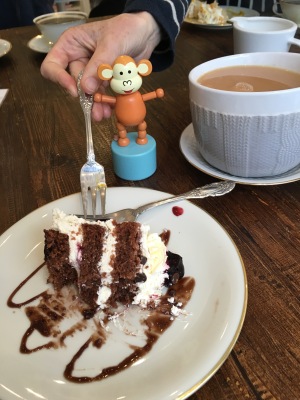 There was lots more walking around town and, when we got home, we had a well deserved sit down and a read.

In the evening, Karen made dinner – well, actually, not particularly made, more heated up but it was tasty nonetheless. There was a rather nice sunset too, although its not come out very well in the photo.

With dinner comes drinking and there wasn’t too much, but I thought I ought to help them out as I’m on holiday. I took it a bit far though when I decided flying was the right thing to do. 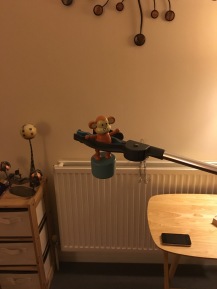 After that, I was sent to bed.

However, Sunday was a new day and bought another food fest as we went out for lunch at The Hoy. Steph said that if I ate my vegetables (which were, of course, carrots) that I could have a treat and she let me have a sip of her wine. 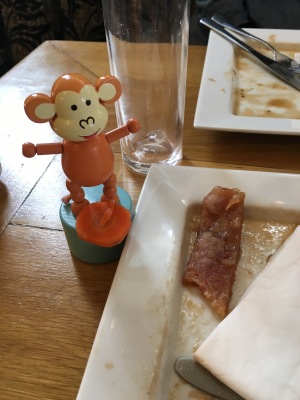 Not sure that was a good idea though that early in the day as I then played in my Yorkshire pudding. I had to really as it was a perfect fit for me but, fortunately, there wasn’t any gravy left. 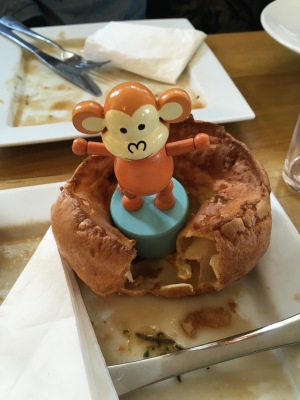 Gosh, so that was a rather exciting start to the holiday. Watch out for the next blog to find out what I did over the remaining days off.