Hello folks, sorry for the delay in blogging. My assistant  wasn’t available for a little while and, as you may remember, I need help with typing due to my short arms. It does mean that this is a rather long post as it covers half of March but hopefully you have time to read it.

There was a special milestone birthday this month and Lucy has been celebrating turning 30 in style. I went to visit her before she went away for the weekend in Barcelona but she was working from home that day (it may look like everyone else was as well, but its because it was early). Thankfully I was able to celebrate with her when we went out for a pizza lunch earlier in the week. 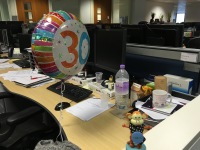 The weekend in mid March was rather lovely and the sun was shinning, even if it wasn’t that warm. I didn’t need my jumper though whilst I was wandering round Margate. I started off with some rock climbing near home then headed towards the Old Town and the harbour arm.

I tried to have a paddle but, for some reason, I was held back. Not sure if it was because the sea was too deep or some other reason – I never did find out why and really must before summer is in full swing.

It was a rather beautiful sunset over the Main Sands that weekend even if it was a bit misty. 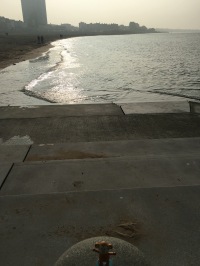 Its a good job I made the most of the weekend because I was then trapped at home for most of the week as Karen wasn’t well. Here’s me looking longingly out the window when it was sunny and then enjoying another lovely sunset (you have to overlook the parked cars). 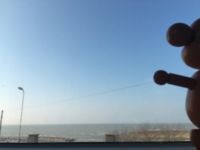 Karen’s mum visited the following weekend so I was able to get out a bit more then. We had a walk along the front and onto the beach, so I took the opportunity to do some sea wall climbing and say hello to the seagulls. That was then followed by a rather nice lunch at Bernie’s who have heart shaped bowls.

On the Sunday we did, of course, have to go out for Sunday lunch and had a rather delicious roast at The Hoy. Unfortunately there was no room for dessert although Karen had a hot chocolate and finished without letting me have any – here’s me looking rather wistfully at the empty mug.

It was back to normal for a few days and it was lovely to be in the office with everyone again. Karen had to work from home on Thursday and I tried to tell her that my weekend had started but she insisted that I did some work. I even had to keep my work clothes on.

However, one advantage of working at home is that you’re there for parcels and Karen got a new friend called Wilbur. Apparently she saw a British Gas advert on the TV and asked if she could look after him. They weren’t sure initially but, when she pointed out the adventures that we have, they relented and sent Wilbur to her. Initially I was a bit scared as he’s quite a bit bigger than me but then I saw his orange feet and beak and all was okay. I’m actually quite glad he’s bigger than me because it means he won’t fit in Karen’s bag and so the adventures will continue to be all mine, all mine (insert evil laugh). 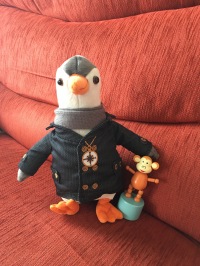 And then it was Easter – yes, Easter and its only March. Good Friday was a beautiful day in Margate and brilliant sunshine and clear blue skies, so we had to make the most of it by going for a long walk. Here’s me at Westbrook Bay (my beach) and we walked all the way round to St Mildred’s Bay. Fortunately there was a seat when we got there as it was rather tiring.

The rest of the weekend wasn’t quite so good, not only weather wise, but adventure wise. It involved emergency dentist and planned hospital appointment. At least we got lots of rest so now ready for the working week. Don’t worry, I do know Monday is a bank holiday.