Last week, Karen went out for a pancake day brunch but she left me behind – scandalous behaviour! I missed some rather large but delicious selections. One was a savoury American style breakfast and the other a banoffee pie. Good job they decided to share them (or so I’m told …).

Fortunately Karen remembered to take me out for the team meal, but then it was Christmas. Yes, you did read that right, it was the team’s Christmas meal. It had been a rather cold week so I started off with my jumper on. Fortunately, I soon warmed up and then found a monkey sized glass as the milkshake glass was bigger than me.

Then came the food and, oh my goodness, there was so much food. The main course was a meat platter and my new friend Charlie helped me choose what to have. We didn’t manage to finish it all and it was rather a waste as they just threw it away rather than giving it away to a homeless charity. 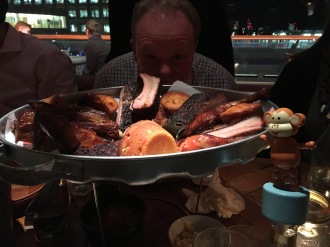 We still managed to fit in some desserts although didn’t quite finish them. I nearly didn’t get any as they just dug in very quickly but did manage to eat some banana cream pie in the end.

Thankfully the meal out was on Thursday so I only had one working day to get through, especially after not getting home until 11pm. It was a bit mean, though, as Karen took me home on Thursday night but wouldn’t let me stay at home on the Friday. Apparently it was because she can’t work without my supervision but I think it was just because she was up early that I had to be up early too.

The weekend was a bit healthier and bought some welcome fresh air. Walking to the Turner Contemporary on Saturday was pleasant and there was a very interesting branch which had washed up on Margate main sands. 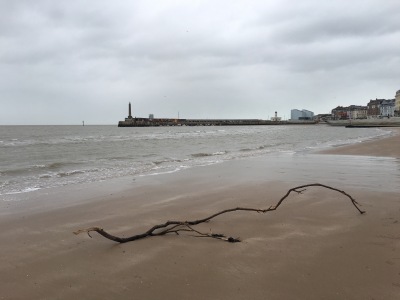 At the gallery there were three exhibitions to choose from. The exhibition by Joachim Koester called The Other Side of the Sky was the one Karen wanted to see but I thought it was rather weird. It was primarily about drugs and how they alter the body’s reactions so the title was rather misleading. The only uplifting artwork was a few paintings from Turner showing his early colours work.

The exhibition I liked the most was Leise Wilson’s 365 Days. The paintings, which were the size of polaroids, documented the view of the sky at low tide through the same window pane each day over two years. It was lovely to see all the different colours and reminded me how lucky I am to live by the sea and be able to appreciate that most days.

After all that walking and wandering round exhibitions, a sit down was in order so we went to the rather nice Proper Coffee shop. Thankfully, we were allowed tea and there’s nothing better than a good cup of tea, a sit down and a bit of a read. I also rather liked the mini milk bottle. 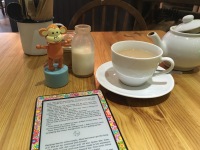 Sunday bought more fresh air after a bit of a lay in. There was an interesting navy ship nearby which was rather grey compared to the normal tanker ships. I’m not sure you can see it very well in this picture but I hope you can see the seagull.

It was quite windy, though, so I had to stay protected for quite a while. To keep Karen amused, she went on a shell hunt and even found some orange coloured ones just for me.

And, as we all know, orange is the best colour ever!