Well happy new year to you all. My 2016 started with some fireworks over the Harbour Arm in Margate. They were pretty, but a bit loud and, as it was dark, it was a bit scary so Karen held my hand and made sure I was kept warm and safe.

The long weekend was pretty relaxing and mainly involved playing on the beach to have a change from the TV. I found some ‘twins’ – orange shells which were lovely, although not as lovely as my orange, because I am the original don’t you know.

Then I came across a nasty looking double oyster shell that I tried to run away from but my little legs wouldn’t allow it, so I tried to escape on a homemade raft made from a single oyster shell. That wasn’t terribly successful either, not sure if that was because of the weight of the shell or lack of water (and absolutely nothing to do with all the Christmas food and goodies).  I think some oars might have come in handy but, unbelievably, Karen didn’t have any with her (shocking behaviour).

Fortunately I was able to go to the top of my castle for safety (which someone else had kindly built for me). 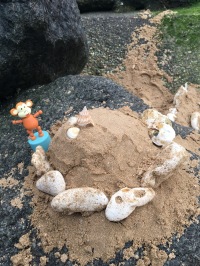 I also went to Westwood Cross shopping centre and they still had their Christmas decorations up. There was this rather huge reindeer which I stayed away from and I think even the baubles were bigger than me. I couldn’t see many orange ones so that was a bit disappointing. 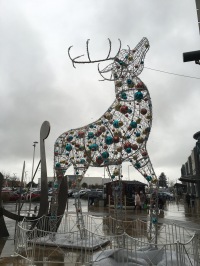 It was back to work on Monday and, as I had been working last week, it wasn’t too much of a shock (but trains were busy again). Maria had bought Karen an origami calendar and the first item was a paper cup. I thought it looked more like a pirate hat (ahoy me hearties) and I certainly wouldn’t have wanted to put any water in it as it had a hole in the bottom!

Jo gave me a very special Christmas present which was perfect timing as it is just right as a sleeping bag (apparently it is a glasses case but I’m not convinced personally). Not sure I felt quite comfortable in the office because of the position of my head, but I’ll get to use it properly next week when I’m off to Cape Verde on holiday.

So watch out for the photos of me on the sun bed by the pool (I promise I’ll be decent).