Are you sitting comfortably? Then I shall begin … to tell you all about my travels in the USA.

It all started at Heathrow airport where there was a rugby ball for the world cup. Fortunately it wasn’t being used for play as it was rather large, even for human sized people. 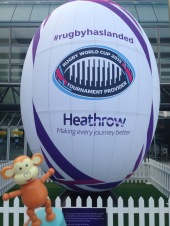 We flew to New York and spent one night there. There was a great view from the hotel room and Karen wanted to go out but all I wanted to do was go to bed.

So she dragged me out for a milkshake but there were so many people about. Fortunately, I felt much safer and a bit more at home when I saw this. 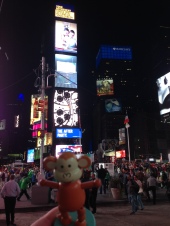 After finally getting to bed at 9pm and having a good sleep, the next day we met Vivi and Andrea for lunch which was great to see them both. I couldn’t believe it was the first time I’d met them and Adam hadn’t taken me to New York although, as we all know, his looking after me skills are questionable at times. 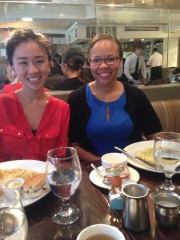 Afterwards we got the train to Washington. It was quite comfortable and lots of leg room. Fortunately I had a window seat some of the way so could see the start of fall.

There were lots of open spaces in Washington and loads to see and do. We got a bus tour which was fun listening to the commentary but Karen would only let me out when it stopped as she didn’t want me falling over the edge. Here I am at the station.

I did get to see Capitol Hill from a distance but got a bit confused as there were Canadian flags in view too, let alone the dome being covered in scaffolding (probably getting ready for the new president in January).

One of the many sights was Lincoln memorial which was slightly larger than me but that was expected. 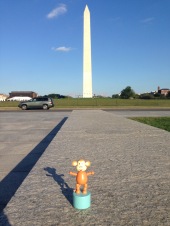 I also visited the sculpture park which was interesting and there was another one I went to, although they wouldn’t let you touch much. This seemed particularly odd for the Henry Moore items as he wanted them to be touched and for people to see how it changed with the weather. I did get out a couple of times though. 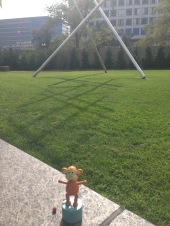 The hotel was nice and they even provided a dressing gown for me.

I wasn’t too keen on their breakfast bar table, despite it being orange and it demonstrates how over the top Americans go for Halloween. Can you spot me? 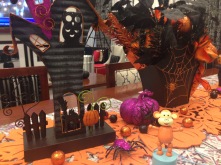 Karen had a rather unusual door key, not because it was a credit card but because of the picture on it. I hope she wasn’t telling me I was a back seat driver – its front seat for me all the way. 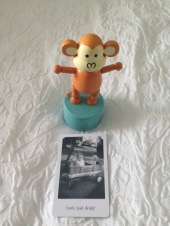 Fortunately, I didn’t have to walk between Washington and Boston but got the train which was quite comfortable and I managed to peek out of the window at the start of fall.

When we got to Boston, it was tipping it down with rain so got a taxi the very short distance to the hotel and the room was huge, absolutely huge – can you see me on the bed?! It was really rather comfortable. 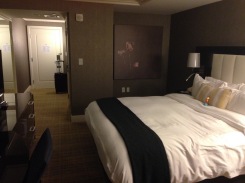 The next day the weather was much nicer and the sun was out again. We headed to Boston public gardens which isn’t the best name for such a beautiful place. Its so well looked after and really peaceful, so lovely to just sit and watch the world go by. I also got to play with the famous ducks too.

And played hide and seek in some plants and then perched in a monkey tree. 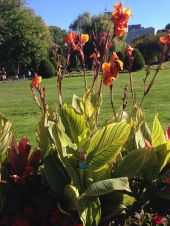 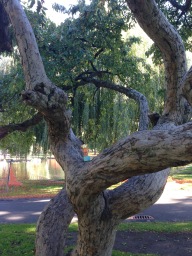 Whilst I was sitting there, a conker fell off a tree but fortunately it didn’t hit me as it might have knocked me out. 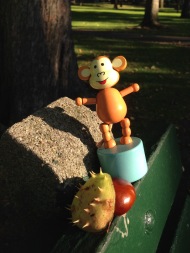 After such a big day with so much fresh air, we needed some sustenance so we went to the Cheesecake Factory, as recommended by Adam, and had this rather delicious slice of Adam’s Peanut Butter Cup  – heaven. I don’t think he has shares in the place … 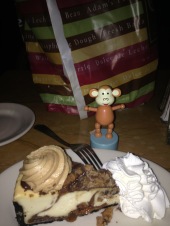 We did loads more walking the next day around the harbour area and saw this rather fascinating bridge.

We then went for the harbour walk and I rather liked this sun dial.

All over America, there were tons and tons of fire hydrants. This was my favourite as it was red and yellow and we know that makes orange which is the best colour ever. 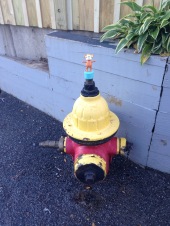 The third day was spent at the Boston Aquarium which was a really interesting place although I was worried there wouldn’t be any monkey’s but there was one after all. 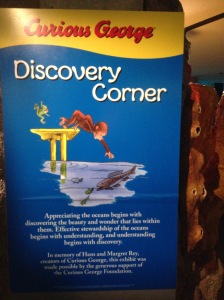 Once I knew I was catered for, I made myself at home and introduce myself to many of the animals. I particularly liked the baby penguin. 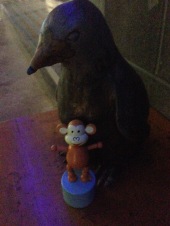 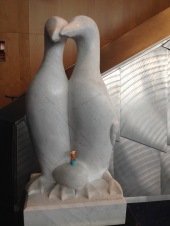 I even saw some dolphins outside but not in the sea.

Karen went on a whale watching boat trip but it was too windy for me to be out, so I got a picture when she got back.

It was Columbus Day when we were in Boston and I was feeling rather patriotic. 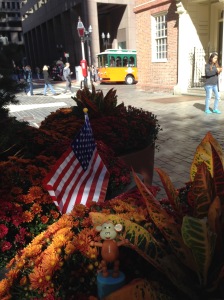 We then headed back to New York and visited the high line which I liked as there were lots of trees to climb. 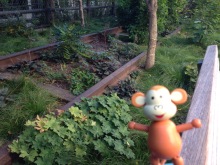 So, I think that’s quite enough for now. Sorry its taken so long to update you on this trip but, as you can see, there was rather a lot to tell you. In the words of Boston – sea you soon.