I wanted to let you know that I arrived safely back in the UK and have been home in Margate, even if it has been three weeks already. I’ve been a bit tired since then so not had chance to blog. I got around to doing it on Sunday but then had some technical problems with the photos, so the USA blog isn’t quite ready to publish yet.

This is just a short one so you know I’m still (monkeying) around. Having said that, Karen hasn’t really helped and she rather neglected me last weekend so I had to visit Vicki on Monday as I was in a sulk. Fortunately Vicki kept me entertained and made sure I was appropriately looked after following the neglect. Fortunately, Karen learnt her lesson and took me out on Sunday.

It was after two minutes silence for Remembrance Sunday.

Then we had some fresh air. It was low tide in Margate but I didn’t mind that as its difficult for me to paddle.

We then wandered round to the Main Sands but it had all changed. A sea defence had appeared and, apparently, its done every winter to help protect the more low lying part of the town.  The mound was rather daunting for someone so little like me. 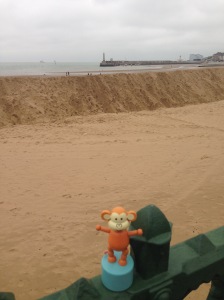 I hadn’t realised that there was quite so much sand on the beach, which I know sounds a bit of a silly thing to say, but I know what I mean. The mound was amusing people so I hope it lasts to do its job.

It was much better round the corner, just near the Turner Contemporary – much more sedate and not at all like November.

That’s all for now I think. I’ll try to sort out the technical problems soon and get the USA blog to you soon.