The weekend started with a really pleasant night out as we went to see the Spread Eagle Players at the Bridewell Theatre as they were putting on Fawlty Towers. The best bit was that I was allowed backstage and even saw Sybil, played by the talented Anita, putting the final touches to her costume. I was then lucky enough to meet Manuel and Basil too. 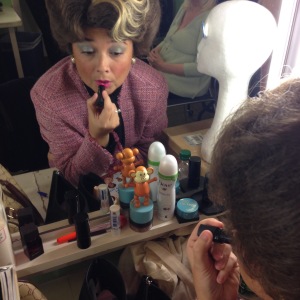 And, even before all that excitement, I had supper with the lovely Lucy. She went for the healthy option but I think I preferred the look of Karen’s choice (well, it was Friday after all).

And, rather bizarrely, as we left Canary Wharf there was a giant Oreo slide! It was shut so I wasn’t able to have a go but probably just as well considering size ratio. 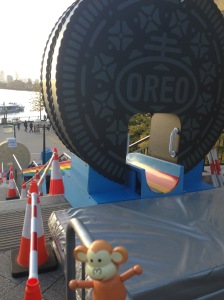 It was a bit of a late night home but totally worth it.

Saturday was spent at home quite a bit as we had to get the curtains installed. Karen went out in the evening to the Comedy Island Festival and saw, amongst others, Zoe Lyons. It was rather fun for her but not me as I was left behind (boo hoo). Mind you, I was told that it was because I was hiding behind the curtains, but personally I’m not convinced by that excuse.

Sunday was a bit more fun as I got to go out in the sunshine twice. It was a lovely sunny day although a bit windy. Karen did have a paddle but wouldn’t let me as she thought my feet may turn the colour of my base. I did find this rather nice shell pool and then some sandcastles as well, which made up for last week’s disappointment.

The beach was fairly quiet and we were lucky enough to see some kite surfers out on the sea, although Karen only managed to get a picture of one of them. 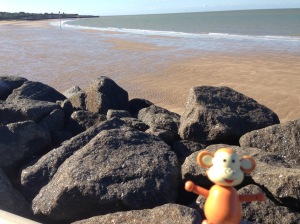 Finally, just so you know, there won’t be any blogs for a couple of weeks as we’re off to the U S of A next Sunday, visiting friends in New York then onto Washington and Boston. Book some time in your diary to read the blog when I get back – its going to be a long one (although I can’t guarantee when it will be written as I might be a bit jet lagged).