Here’s my weekly update mostly from the beach (of course!). Having said that, I did have a midweek break to New York which was rather pleasant. I even saw the Statue of Liberty (unlike some others who just saw the office).

On Friday we managed to leave work earlier than usual as had done everything that was needed that day. It was really rather exciting although the train was busier, so I think travelling later is actually better (rather bizarrely). Anyway, because I was so excited Karen insisted I wear a seat belt so I was safe. 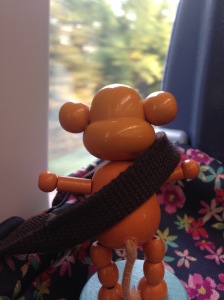 I knew we were home when I saw the big wheel at Dreamland.

On Saturday it was quite a nice sunny day so we went out for a walk but were rather surprised at how empty the beach was – look, I had it all to myself!

I thought I’d be a bit adventurous and do some rock climbing, although I wasn’t allowed to the top as it was too high.

When we got home, we went in the back door and there was a not so subtle sign on the doormat about wiping our feet. Not sure how that works for me though as my feet don’t touch the sand …

The rest of the day I spent looking out the window as Karen had yet more sorting out to do, but think its nearly done now, even the pictures are (at long last) on the wall. The good news is that the for sale sign has gone so my view is even better now.

On Sunday we went out for brunch but it was a bit disappointing. Glad I had my outside time before we ate as afterwards it was raining for a while. The sun came out later but far too tired to go for another walk, so just admired the view from the window.